How to find us

If you are coming from the East  (from Colorado Springs):

If you are coming from the West  (from Fairplay/Hartsel via Highway 285):

Important: Please do not approach the launch site from Elkhorn Road (CR 15) off of Highway 24. This is a private road and the gate will likely be locked. Instead, please take CR 59 from Hartsel to the West or CR 23 to CR 59 to the East. 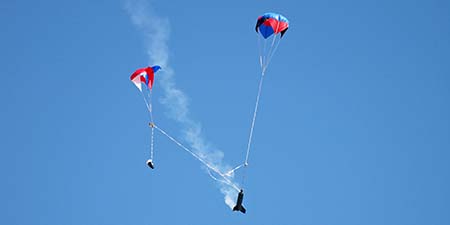 Directions to Our Site
Directions

Our Next launch is scheduled for October 17, 2021
Fall Frenzy Launch Summary:
I believe this was the biggest launch we have had in the last few years!  Lots of Certifications, big engines, small engines, visitors, and a world record flight! Overall a great time.
Congratulations! :
Sincere condolences to David Tan and Hayden Yearout on certification attempts. Both rockets were very capable in my opinion and only failed due to CATO's (engine failure).
There was a total, 53 flight cards.
We had some visitors. The Ruland family from Lawerence Kansas, Scott Storey from Des Moines IA, some from Utah, and Bryan Duke came from Eads TN.
Flights of note:
SPECIAL flight by Bdale Garbee(Altus Metrum), launched his Mega Nuke on a CTI N3301.  Very Impressive!  See some of the pictures in the Tripoli-Colorado Facebook Group. It was launched off of Terry Lee's trailer tower.
WORLD RECORD!! Pending Tripoli Certification, Bryan Duke Launched his Vanish 24 on a CTI G150 to 10,093 feet. As near as I can tell this was over 1,000 feet higher than any previous NAR or Tripoli Record for a G engine! Congratulations Bryan!
Very amazing! It pulled 90G's! See pictures at Tripoli-Colorado Facebook Group.
Special thanks to Jon Skuba for bringing the Moto Joe Store and getting in some flights too! and Thank you George Barnes for all the great pictures and some nice flights!
I know I'm leaving some things out. Some of the founding  members of Tripoli Colorado attended too. Feel free to fill in the blanks or make corrections at Tripoli-Colorado Facebook Group.
For those who are curious, the last two flights were recovered!
Thanks to all who attended. It was a fun time!
JJ
John Jamieson
Prefect Tripoli Colorado
TRA #04920