First Launch of the Year! 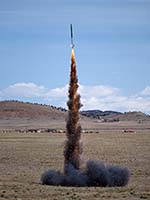 After two failed attempts in April, we finally held our first launch of the year this past Sunday, May 18, at our Hartsel launch site. The weather was even nicer than the forecast had predicted; at least it was when the waiver opened at 9:00am. By 11:00am or so, the wind had picked up to its normal level.

We logged a total of ten flights, including one K and one L motor. See the complete launch log below.

Mike Brazell's guest Blake had the first launch of the day - and of the season! - with his Metalizer on a B6-4. The rocket recovered in good shape just a few yards away. The first high power flight of the day was Bdale Garbee's G3. About his flight, Bdale said "the stats on my orange and black G3 flight using a CTI K500 red motor... Mach 0.9 on the way to 10098 feet AGL. Drogue-less descent rate was only about 24m/s, main descent rate was a little high at 10m/s. PFND! (perfect flight, no damage)." Good thing we had the high-altitude window open for that flight!

Bdale's flight was followed by Mike Gerschefske's "L-something" research motor. The motor chuffed a bit before it finally built up enough pressure to finally make its way off the pad... melting a hole in the blast plate in the process. Mike successfully recovered his rocket a bit later.

Among the other flights were Greg Jeziorski flying "Flower Power," the kit that his wife Janet won at the Rocket Dinner in February, and painted herself. The rocket separated and "planted" in the ground a ways away. Dave Hanson flew his upscaled Goblin-4 with a twist: the rocket carried a passenger, a toy Android which recovered under its own parachute. At deployment, the little green fellow quickly floated out of sight; despite Dave's 3 mile hike, he never found it. Luckily, Bdale picked it up on his way back from recovering his G3 flight.

All in all, a fun day on the range at Hartsel that sets the tone for the rest of the flying season.

Photo Gallery for May 18, 2014 Tripoli-Colorado launch

Our annual meeting is scheduled for December 11, 12-2:30 PM Meeting Room A, at the Castlewood library 6739 S. Uinta St., Centennial, CO 80112 . Hopefully the meeting will not last that long but I didn't want to be rushed out of the library normally it is 1 hour. All are welcome to attend. We will be electing officers, discussing the annual dinner possibilities, approving the calendar for the next two years, and usual business stuff.

We usually have lunch at a nearby restaurant after the meeting. We will decide that at the meeting.

Our last launch in November was well attended. Great weather all day! Thanks to all who helped and launched. It was a good time and we did have several certs!